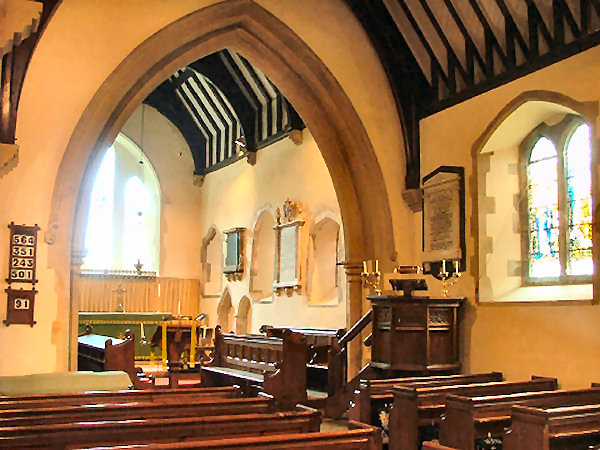 Standing on high ground in a manicured churchyard, St Nicholas is full of interest. Its 17th century tower is a pleasing mixture of flint and stone and is capped with a jaunty cupola - quite an East Kent feature (see also Sandwich St Peter and Woodnesborough). The interior is an odd shape as the tower fills the west end of the nave and the 14th century north aisle runs along its north face - not odd when ones thinks of the chronology but definitely odd to the casual visitor. The nave is dominated by the rather crude three bay arcade to the north aisle dating from the 14th century, whilst the chancel is crammed with tablets to 18th and 19th century residents, particularly the Monins family who are still Patrons of the living. On, of 1806, is signed `Bacon Junior`. Two of the north chancel windows retain their original stonework. Opposite is a simple double sedilia whose arches are dissimilar - that to the east having a nicely shouldered arch whilst its companion is severely plain. There is some fine stained glass (although the best representation of St Nicholas with the boys in the tub is under the tower and difficult to see). A more modern representation of the Patron Saint is in the north aisle accompanied by St Francis, whilst nearby are the rarely portrayed Lois, Eunice and Dorcas. The stonework of this window is Victorian and tries to make a statement although, in reality it cuts out the central light. All in all a most pleasant and welcoming church.