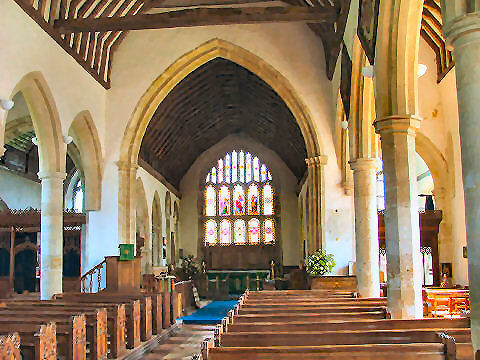 Standing high on a rise to the south of the village street, this is a prominent sandstone building of thirteenth- and fourteenth-century date. The most interesting feature is the eighteenth century family pew. It stands on a gallery and comes complete with tables and chairs! The screen beneath it was added by W.D. Caroe in the 1920s. In the arch to the opposite chapel is a memorial to Lt Tennant designed by Lutyens. There are three holy water stoups in the church and a very good piscina in the chancel. The font is of about the same date and shows the arms of two prominent medieval families, the Guilfords and the Culpepers. The church contains a seventeenth-century wooden alms box and on the south door-frame is a medieval mass dial.