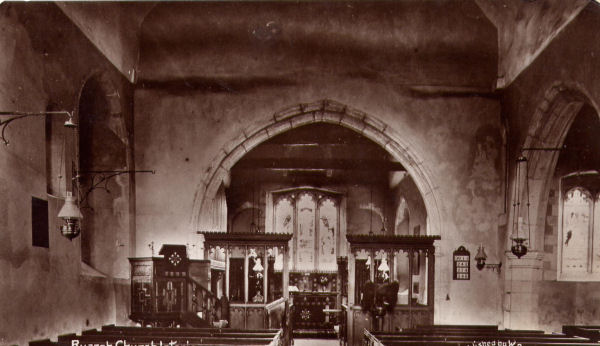 An attractive church which stands a long way from its (later) village. The building is of Norman date and the north wall of the nave displays some good herringbone masonry and a tiny round-headed window above. Inside there is an unusual Norman pillar piscina on the south side of the chancel. A south aisle was added in the fifteenth century and has a nicely proportioned gabled east end. The rood loft staircase is still visible inside as are the responds of the eastern triplet of Norman windows, replaced by the present east window in the Perpendicular period. The south aisle roof is dated and obviously indicates a replacement after damage in the eighteenth century, whilst other good quality woodwork includes a Jacobean pulpit.