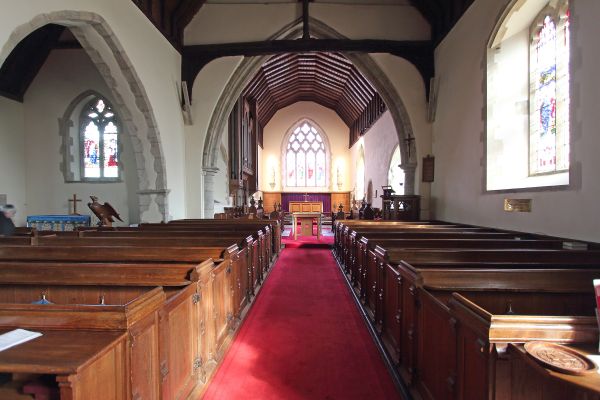 A beautifully cared for church at the end of a cul de sac. It consists of nave and chancel and north aisle. The nave west wall is Norman as the west door is a fine example of the period, unfortunately the carving now only visible from inside the vestry. A hagioscope to allow the ringer of the Sanctus bell to see the altar pierces the wall higher up. The Norman chancel was extended in the thirteenth century and the joins in the masonry may be clearly seen outside. The church contains some good memorial brasses, the most unusual in the centre of the chancel actually commemorates the burial of the `bowelles` - presumably the rest of the deceased was buried in a monastery where prayers could be offered for her soul. The treasure of the church is the huge medieval chest with intricately carved tracery of the `decorated` period of architecture. Most of the glass is by Clayton and Bell including a rather unusual yellow window in the north aisle, whilst the east window is a very rare early Victorian design by an artist from Hull.