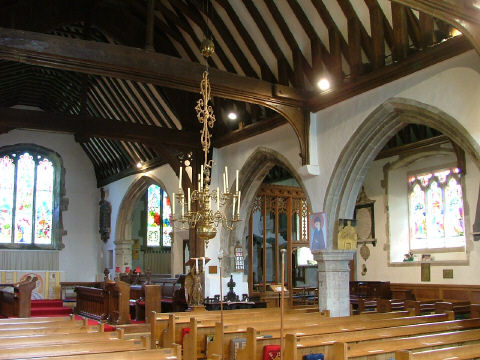 Quite a landmark from the M26, Seal church stands a little to the north of its village, on high ground, overlooking the Vale of Holmesdale. The visitor is first struck by the length of the building, constructed in the thirteenth century and altered a hundred years later. The south arcade is medieval while the north is clearly Victorian. The wonderful chancel screen was designed by the Arts and Crafts architect C.R. Ashbee in 1931. Among other fine furnishings is the wooden lectern which shows the Angel of Victory supporting the bible. It is possible that the same (unknown) designer worked on the bronze memorial to Elizabeth Mills in the Lady Chapel. This shows the girl, who died aged six, asleep between two angel's wings. There are plenty of other memorials of note, including several wall tablets by Sir Francis Chantrey designed in the 1830s.