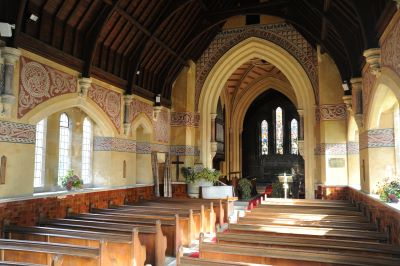 The church of St. Giles in Shipbourne, near Tonbridge, overlooks a large open common. Its history is intertwined with the large nearby country estate of Fairlawne, and in 1879-81 the then owners, the Cazelet family, paid for the previous church to be completely demolished and rebuilt. The original church was a small 14th century chapel which was itself replaced between 1721-22 with a Palladian church designed by architect James Gibbs which was paid for by Fairlawne's previous owners, the Lord Barnard, Christopher Vine. Nothing structural remains of either Gibbs' church or the medieval church it replaced; only the church bells and a large monument to Christopher Vine (died 1723) and his wife and daughter (both named Elizabeth). This monument, carved by Michael Rysbrack, was rehoused in the south transept of the Victorian church we see today. The church is built of local Kentish ragstone with Bath stone dressings. The style is based on 13th century Gothic and it has a Normanesque capped central tower. The architects are quite obscure: they are listed simply as Mann and Saunders. It could be that this pairing were William G. Saunders and F. Mann. Both worked in Sussex around the same period. The interior has hardly changed since it was built. The total cost was £20,000 - a huge sum at the time, indicating that the Cazelet family of Fairlawne had sufficient wealth to pay for it! Various monuments and plaques in the chancel are dedicated to members of this family including a recent one to Peter Cazelet (died 1973) who trained the Queen Mother's racehorses. The church is of a cruciform shape with a central tower. The transepts are small, with the south transept being used as a small chapel, as well as housing the Vine monument dedicated to the Fairlawne estate's former owners and the benefactors of the first rebuilding of the church. The north transept holds the organ and contains a small vestry with a turreted staircase leading to the tower. The stained-glass windows are German in design, emanating from the workshops of Mayer of Munich. The nave and chancel are beautifully decorated throughout with an eccentric mix of stencilling and sgraffito. The west wall has an intriguing set of canopied and pinnacled wooden stalls running the length of it. I have no idea why they were sited at this part of the church directly behind the font, perhaps there is a connection. Text by Rob Baker