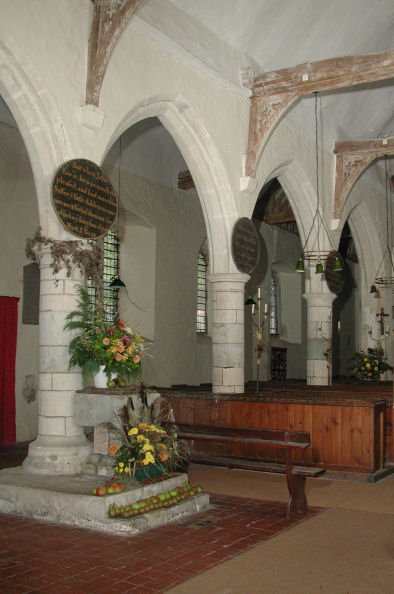 An over-restored but characterful church in a leafy position off the main road. Mainly thirteenth century in date, with a fifteenth-century west tower and eighteenth-century brick porch. The tower was added to the existing structure as a free-standing element, only being joined on after it had been allowed to settle. The resultant join may be clearly seen both outside and in. There is a good square thirteenth-century font and remains of the rood loft staircase. By far the most interesting feature is the large wall painting of a ship opposite the main door. It seems to date from the sixteenth century and was only discovered in 1971 under a layer of whitewash and local tradition indicates that this may have been a sign to smugglers that there was a hiding place somewhere in the building. The tie-beams of the barrel-vaulted roof have a relief carving on the underside, almost forming a decorative boss - a very unusual feature so far from any centre of medieval craftsmanship.