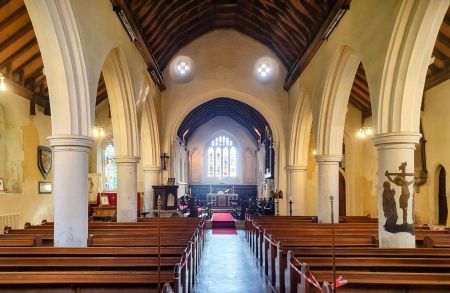 In an awkward position, cut off from its village by the railway and bypass and somewhat compromised by the adjoining paper mill. The present church has been extended from its thirteenth century origins, most noticeably by the addition of a tall tower in the fifteenth century. There is a rood loft staircase in the south wall and on a pillar nearby can still be seen an unusual fourteenth-century Crucifixion painted on the stonework within an incised outline. The church was over-restored by Blomfield in 1870 and suffered damage in the Second World War when the medieval glass was destroyed. Fragments that survived have been assembled where possible. New windows were installed, including the thirty-six symbols of the saints in the east window by Hugh Easton (1953), and the Becket Pilgrim window by Moira Forsyth (1966). A large memorial in the south aisle commemorates Thomas Waghorn (d. 1850), who pioneered the overland route to India.