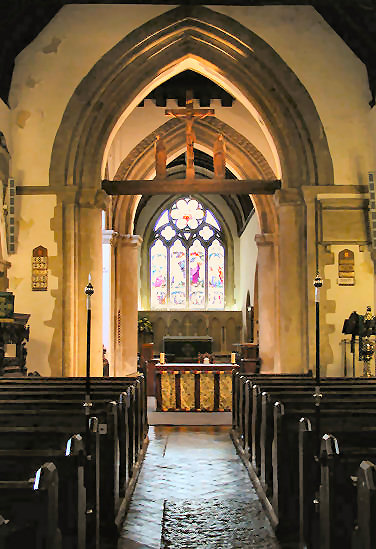 Very much a village church, set back from the road in the heart of this former agricultural settlement. Now a suburb of Ramsgate it is the original parish church for the later resort. Norman in date, with a fine crossing tower, it is well worth a visit if only for its monuments which record many military men (who passed through the parish during the Napoleonic Wars) and the wealthy eighteenth century visitors who came to Ramsgate for their health and died there. There is a fine Royal Arms of George II over the south door, whilst a twentieth century rood beam emphasises the height of the Norman crossing arch. The chancel is pleasantly empty, with a noble nineteenth century reredos of blank arcading. The south chapel contains an unusual memorial to Sarah Spencer who died in 1745. This poor lady has had so many later members of her family commemorated on her tablet, that there is no room left. Every flat surface has been utilised! Opposite is a little-known but eminently beautiful relief of Henrietta Ashley who died in 1874 carved by the Royal Academician Thomas Woolner. The collection of stained glass has recently been enriched by a window in the north aisle by the Cathedral Studios (1998) which depicts the nearby St Augustine's Cross. It is a simple, dignified and moving attempt to record the 1400th anniversary of the landing of St Augustine which occurred just a couple of miles away. Other stained glass can best be described as curious. The east window was erected as a memorial to Queen Victoria who, we are told, `worshipped in this church` when staying in the area. At the base is a series of panels recording the arrival of St Augustine. One shows the baptism of King Ethelbert in the font of St Martin's Church, Canterbury - a font which wasn't carved until 400 years later! The artist, Alfred Hemming, obviously felt that a font of authentic design would not have been worthy of the subject! The bizarre east window in the south chapel (1902) shows some very sleepy dead being woken at the Last Trump whilst St Peter swings his key impatiently at the gates of Heaven! Not to be missed!