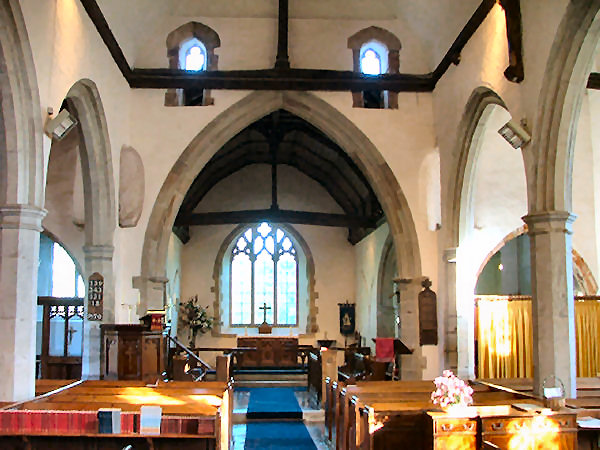 Famous as home to a third-century Roman altar, this church looks out from its island position over the marshes below. It is seldom you hear a car here and sitting in the peaceful church you can be transported back in time. But this is not a run of the mill church, nor one that has stood still. Everywhere you look there are signs of alterations. The three bay arcades of north and south aisles date from the fifteenth century. Until the nineteenth century the north chapel, separated from the church by a medieval screen, was the village school. After it had moved to its own building the east end of the church was restored by Ewan Christian, and most of the chancel fittings are by him. High in the east wall of the nave are two windows that would have thrown light onto the Rood figures - the entrances to the Rood Loft are very crudely cut through the eastern walls of the arcades and show that the loft itself must have been some way above the capitals of the chancel arch - though the present arch is not original. On the north wall of the nave the commandment boards, originally fixed onto the east wall, are set in delightfully prickly gothic frames. The tower screen is dated 1705 and contains the initials of the churchwardens who commissioned it. The chancel has blank arcades set into both north and south walls - remnants may also be seen outside, showing that the church was once larger. Indeed, in the north chapel, set into the SE corner is a calcified sandstone pier - evidence that a massive fire occurred in the late medieval period.