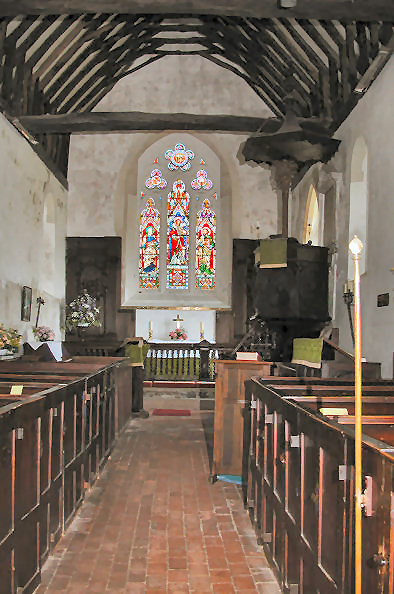 Tucked away by farm buildings well away from its village, this is one of the most rewarding churches to visit in west Kent. Although it is a simple rectangular building with an added south tower it is full of character and furnishings of quality. The pulpit came from Westminster Abbey in 1820 and completely dominates the interior. Designed by Henry Keene in the late 1700s it was thrown out to make room for the coronation of George IV. The sounding board is carried up like a palm tree. The altar rails are eighteenth century and just to the left of the main central gate is a most unusual feature, an offertory box for the churching of women. There is a good selection of stained glass for such a small church - ranging from large fifteenth-century canopy work in the tracery of the north window, through Ward and Hughes' glass of 1885 in the west window, to Comper-style glass in the south wall and a late twentieth century window by Keith and Judy Hill depicting Bishop Gundulf (who lived in a house on the site of the neighbouring manor in the eleventh century). The artist Graham Sutherland is buried in the churchyard.