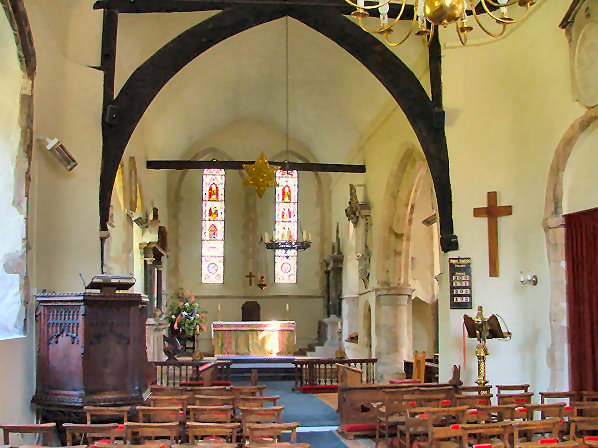 Drastically damaged in a fire in 1972, the church has been restored. Built as is usual in this part of the county of flint with ragstone dressings, its stands on a plateau between two steep valleys. The tower stands on the south of the church, with only a plain parapet to distinguish its otherwise defensive appearance. The east wall has a pair of thirteenth century lancet windows – tall and deeply splayed internally, which contain some outstanding 14th century glass, restored in the last century by Canterbury Cathedral glaziers. There are also come interesting monuments in the church. The brass to a former priest here, John Strete, dates from the early fifteenth century and depicts him kneeling in prayer. The prayer is carried up on a scroll to St Peter and St Paul, patrons saints of the church. In the chancel is a large monument in alabaster to Thomas Hamon (d 1684). It has to be said that it is not one of the county`s better monuments of the period. However in the south aisle is something altogether finer – a memorial to the last baronet of the Hardres family, Sir William, who died in 1764. This fine architectural tablet has in its pediment a portrait medallion of the deceased. The inscription describes him as `just, benevolent and charitable`.