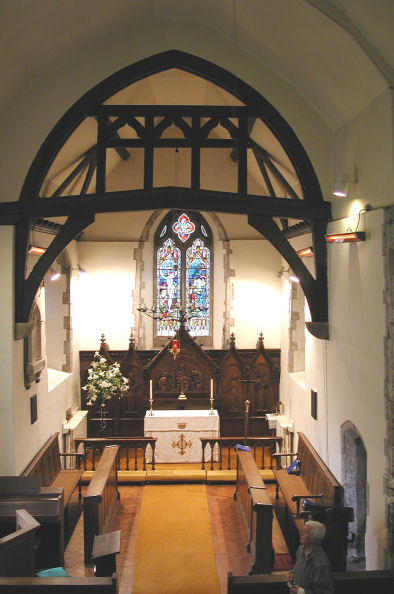 Very much the 'church in the woods', St Edmund's takes a bit of finding. It is a typical building of the Saxo-Norman overlap, with the corners formed, unusually, of flint and not dressed stone. The tower originally had an eastern apse like the one that still exists at Godmersham, and its blocked-up arch may be clearly seen. There was a south aisle too, the arcade of which is also blocked, and whose roofline can be found on the west wall of the tower. The church contains one of the finest medieval wall paintings in the county, and some very good glass. The wall painting depicts Cain and Abel, and survives in the deep splay of a south window. Cain holds a wheatsheaf and Abel a lamb. It dates from the Norman period and was discovered under whitewash in 1908. To the east, and at the same height, is a small window containing fragments of early glass constructed in Tudor times to throw light on to the rood figures. In the quatrefoils of the north windows are fourteenth-century painted figures of the seated Christ and the Virgin and Child. A modern addition to the furnishings is the wooden font, which was given in 1975.