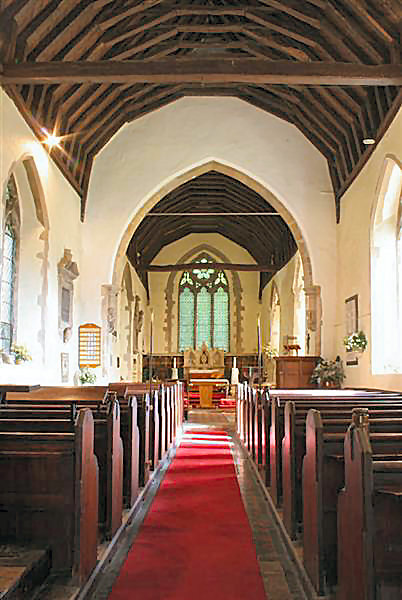 A lovely church in an unknown village just yards off the main road. Usually open during the summer it is a small building of great charm. Norman in origin the chancel is built with huge quantities of puddingstone. Whilst this may be seen in small amounts locally this really is the largest concentration of this rare conglomerate. Inside there are many treasures. On the north nave wall is a tablet signed by Sir Henry Cheere and by Edward Scheemackers (brother of the famous sculptor, Peter). To get a tablet signed by two sculptors is unusual but when you consider that this was amongst their first works, it really is remarkable. The chancel arch is held in placed by two grimacing carved figures. Authorities say they are original but I doubt it – or if they are then the Victorians certainly chiselled them up a bit! However the sedilia is original and a splendid creation for such a small church. The glass in the huge west window contains portraits of two Victorians it commemorates – amongst the host of Biblical figures.