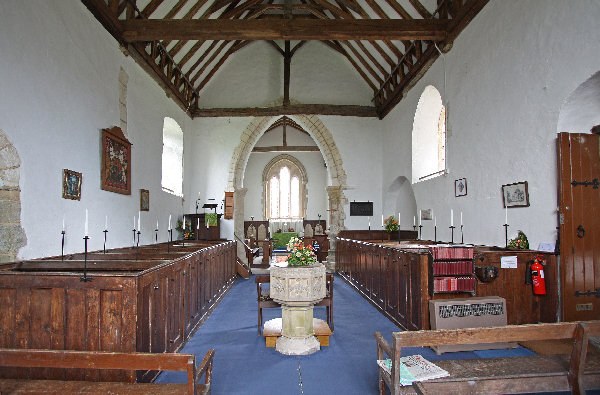 A great surprise meets the visitor who is lucky enough to gain admittance here! The church is entered by walking up a hill, but you actually step down into the interior as the hill drops away steeply to the north, with the church set into its ridge. A Norman flint church of nave, chancel and later south tower, it is a haven of peace and light. Much of the latter floods in through the huge Decorated west window (its lancet predecessors may be seen in the wall outside). The church has a rare interior indeed – box pews run down north and south walls and there is a huge alley between, designed for the benches that still survive dotted about the building. Box pews were rented; the benches were for the non-paying poor. In pride of position is the pulpit. All this woodwork dates from the early nineteenth century, although the chancel was refurnished in the 1877s by the Church Commissioners and is standard fare. The lovely east window, the stonework of which is surely of the 1870s, contains some Georgian coloured glass edging – most delightful. Beautifully cared for and much loved, it is a shame that it is not more accessible to the casual visitor.