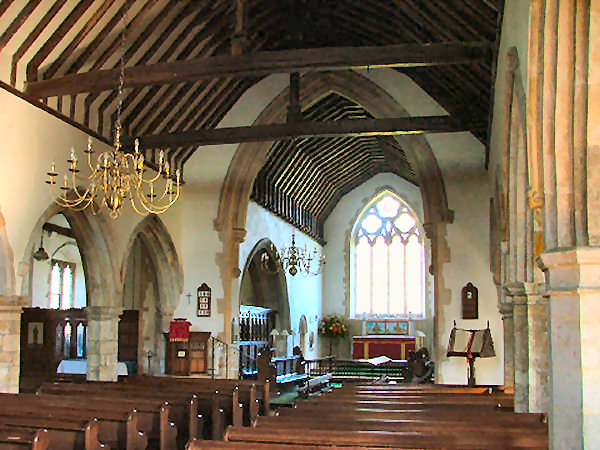 An impressive church of mainly fourteenth-century date. The tower, which was still under construction in the early sixteenth century, is one of the most striking features. Externally it is memorable for the composition of the west door and window. The doorway has finely carved spandrels and label-stops, but the window above has two designs incorporated into it - Tudor arches for the bottom four lights, and Perpendicular arches above. It is quite a thing and obviously the result of local designs dying hard! The tower is topped by an excellent weathervane dated 1751. Inside, the tower arch is also memorable, a tall much-moulded feature, almost as impressive as the tower arch at Horsmonden. The north aisle shows evidence of rebuilding - the two octagonal pillars of fourteenth-century form replaced circular pillars, one of which survives. The church is very light, the east window containing only plain glass, which helps us to appreciate the furnishings and memorials of mainly twentieth-century date. In the south aisle is a tablet to Alfred Lyttleton (d. 1913), which was probably carved by Eric Gill. The interesting reredos of the high altar dates from 1967 and depicts St John the Baptist baptising Christ in a local river.