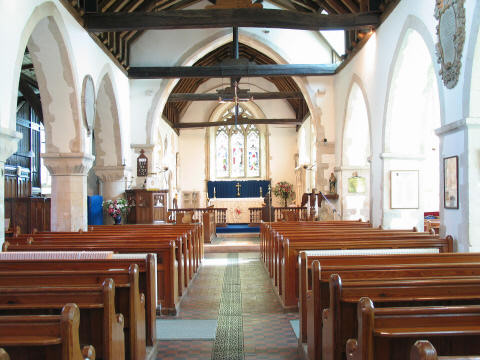 The tower makes this church one of the easiest in Kent to identify. It is capped by a little cupola and wooden balustrade of eighteenth-century date that replaced a medieval spire. During the Middle Ages the church was owned by Leeds Priory which invested heavily in the structure, and was no doubt responsible for the excellent sedilia built in about 1350. The canopy is supported by a quadripartite vault in turn supported by angry little heads. Above the sedilia is the cut-off end of a prickett beam. The east window, of Decorated style stonework, has a thirteenth-century hangover in the form of a shafted rere-arch. There are two excellent modern stained glass windows designed by F.W Cole, which show the Creation (1980) and St Francis (1992). The good altar rails are of Queen Anne's reign, as are the splendid Royal Arms.