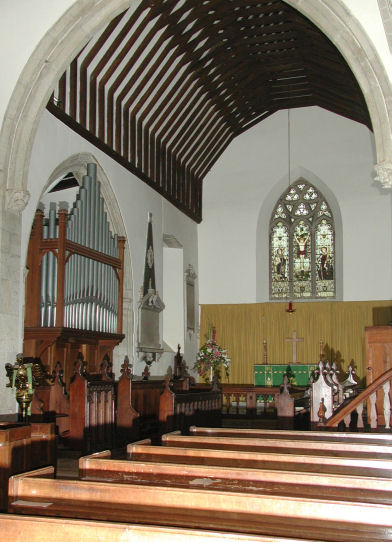 A tall and rather plain church with a typical Kentish tower with the staircase on the southeast corner. The churchyard shows examples of so-called `Oven Vaults`. The feature I find most unusual is the east window which seems far too small for the bulk of the east wall - this is even more noticeable inside. It is apparently nineteenth century. On the south wall interior are the two doors that formerly lead to the Rood Loft which obviously ran across the width of the (narrow) aisle too. Outside the wall was thickened to take the staircase (see also Challock). Around the font are some lovely tiles, re-set from their original locations. The church has two chapels. That to the north is the Frid Chapel - owned by the house of the same name whilst the south chapel is the Lovelace chapel built as a chantry chapel in 1460. Its east window has a fine 1960s window of Our Lady and Child with local farming scenes. It is signed by Wippell`s of London. In the south aisle is the MacMichael window showing Christ surrounded by hop bines. The east window is by C E Kempe and Co and dates from 1914. It shows the Crucifixion with St Augustine and St Margaret. Very different in concept is the Millennium window by the John Corley Studios - a wavy green tree beneath medieval fragments. This is obviously a much-loved church and has many features of note.