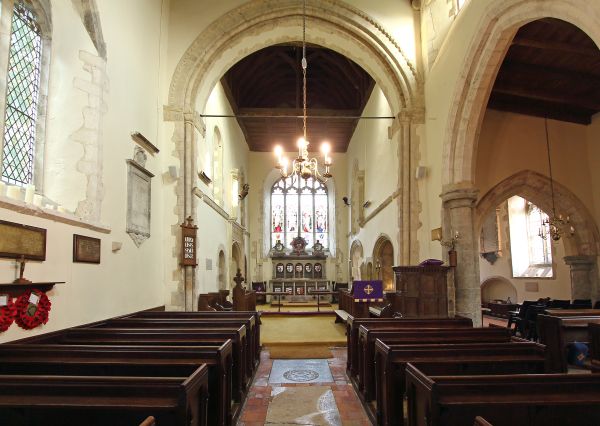 St Mary's is a very tall church, more Saxon in its proportions than Norman. The church dates in its present form from the twelfth century, with typical decoration in the form of pilaster buttresses on the outside north wall of the chancel. In the thirteenth century a south aisle was added and the present arch to the tower rebuilt; the remains of the original Norman arch may still be seen. In the chancel is a remarkable survivor - a twelfth-century window with its original glass. It has been reset and restored, but vividly recalls the dusky colours of the period. The pattern is purely geometric, of flowers and semi-circles, and may be compared to the contemporary glass in Canterbury Cathedral. Also in the chancel is one of the two thirteenth-century heart shrines in Kent. This little piece of sculpture consists of a plain shield - originally painted - under decorated and cusped tracery, the whole squeezed between thin pinnacles. It is uncertain whose heart was buried here, but it dates from about 1296 and may be associated with the de Valence family. The other Kent heart shrine is at Leybourne (see separate entry).