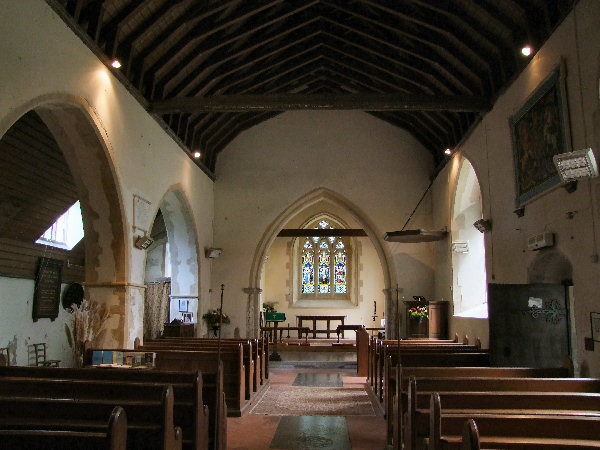 One of the few churches in the county dedicated to a local saint: St Eanswyth came from Folkestone in the seventh century (see separate entry). The church is Norman with thirteenth- and fourteenth-century additions. The south wall of the chancel contains some of the fine herringbone masonry so typical of early Norman work in Kent. Like most churches on Romney Marsh there is an abundance of clear glass at Brenzett, allowing a greater appreciation of the superb tracery of the decorated style windows, especially that in the south nave wall. When the little spire was built in the fourteenth century a wooden frame had to be erected at the west end to support it, and enormous buttresses had to be built outside. The church was somewhat over-restored in the nineteenth century when the east window by Lavers, Barraud and Westlake was installed. The north chapel contains a good monument in alabaster to Sir John Fagge who died in 1639. Father and son lie side by side, one propped on his elbow, the other with his hand on his chest. Their armorial bearings on the front of the tomb chest add a welcome splash of red and white.