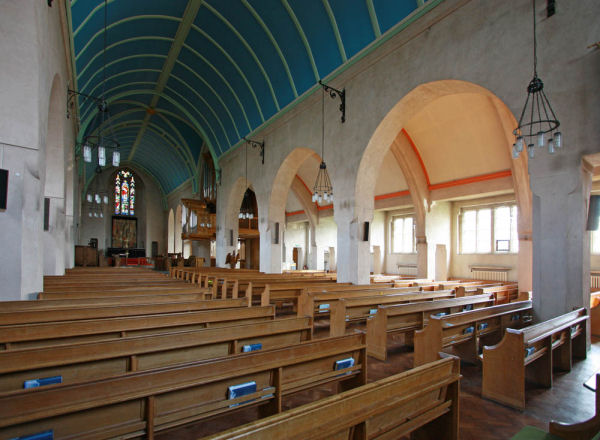 The medieval church, long patronised by the Bishops of Rochester who had a Palace nearby, was destroyed on 16th April 1941. The present church, which incorporates the medieval tower, was built to the south of the original to the designs of J Harold Gibbons. It is a period piece, built on a grand scale in the spirit of medieval gothic but very much of the 1950s. Many windows are by M E Aldridge-Rope, a delightful and much-acclaimed artist. Especially fine are those in the Children's Chapel, an apsidal space attached to the medieval tower. The pulpit was carved by Thompson of Kilburn (the mouse-man) and not only contains his familiar signature, but also a Gibbon to commemorate the architect! Dominating the east end is a huge tapestry by Susan Riley, commissioned to mark the millennium and an outstanding piece of 20c church art. It depicts seven angels in prayer and praise. The altar beneath also has a frontal by the same artist. This may not be the most successful 20c church in Kent, but it is the best of its period and the use of local flint shows that its architect had a good knowledge of the local style.