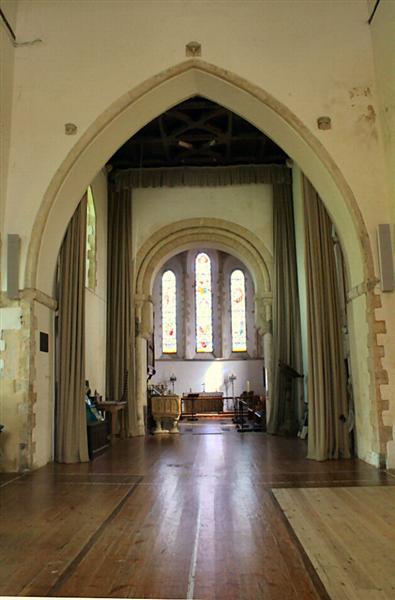 A very strange exterior does not prepare the visitor for an even stranger experience inside the main door, for the church was saved from closure at the end of the twentieth century by being partly converted to a village hall! The exterior is odd because of the stumpy truncated spire which is such a local landmark. The church is built of flint and shows the familiar vertical join which shows where the chancel was extended in the thirteenth century. In addition there are two vertical joints in the west wall of the nave to show where aisles were added - this is quite unusual. The nave has been converted and this unfortunately hides the most important feature, for this church had a rare priests room built within the west end of the north aisle. The only recognisable feature to survive from this today is a small window visible outside. The piers of the nave show some good examples of medieval graffiti whilst the east wall of the nave shows 3 corbel brackets over the chancel arch to take the rood statues. The central tower is Norman and has a wonderful twelfth century doorway in its south wall, whilst an arch of similar date leads into the chancel which is still used as the parish church. A thirteenth century sting-course runs around the walls and there is a double piscina which helps us to clarify the date of rebuilding of this part of the church. A fine oval hanging monument to Jane Denne is signed by the firm of Moore of London.