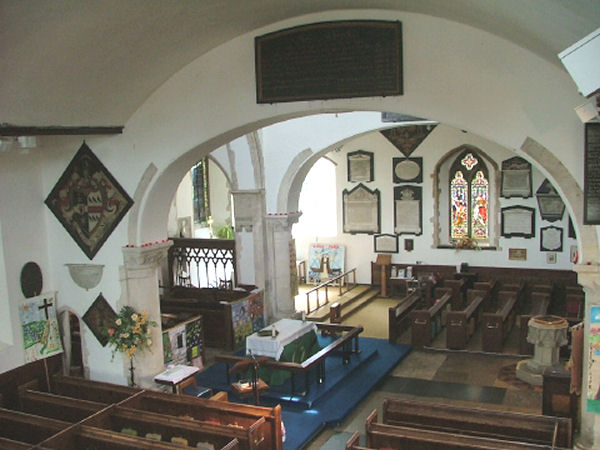 There can be no more remarkable church in Kent than this. St Leonard's incorporates work of every century but you do need to search out its architectural gems so closely are the different periods overlaid. Its chief period are Norman and early and late Georgian, although there is something for everyone here. From the outside it is obvious that the church has been clothed in an outer layer of brick and render, but just here and there medieval stonework appears from under the skirts. The fine west tower is obviously a Georgian structure and it is through this that the church is entered. The vestibule contains the first of what will be a fine collection of 15 hatchments and benefaction boards showing that this was one a very wealthy place. On entering the church one is baffled by an illogical layout. In front of you is an empty space that should be the nave, leading into a very small medieval chancel. To the south is an aisle and chapel but to the north is a veritable auditorium facing south and surrounded on three sides by huge balconies improbably lit by circular windows! You really do have to see it. Occupying the nave is a most elaborate nineteenth century font but it isn't until you are in and look back that you realise that this area too has an enormous gallery now holding one of the grandest organs in Kent, rising like a slightly bedraggled wedding cake! Of the contents one must choose a favourite. For me the Norman pillar piscina of sandstone is an oddity and would not look out of place in a cathedral, whilst the east window of the south aisle with its garish depiction of The Crucifixion cannot be ignored. It is by William Morris and Co of Westminster and is about as far removed from the famous William Morris as it possibly could be! Apart from the hatchments the church contains many fine monuments mostly to Naval men and two Royal Arms. It is not a church to rush as something new is to be found at every turn. To those interested in structures, how it all fits together is a mystery in itself with the lovely Norman arcade having been stretched out to support two elliptical arches. Somehow it works and draws us in.