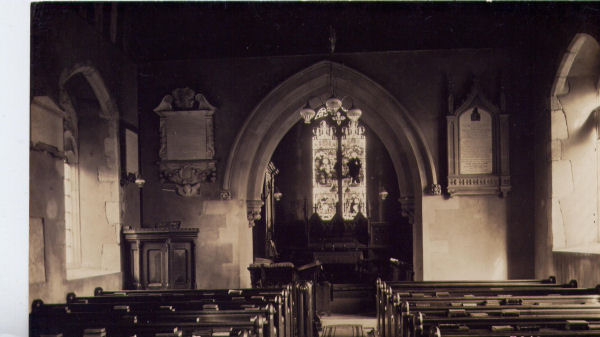 In a picturesque position to the west of a large green, this is a tiny two-cell church of twelfth-century date with a fourteenth-century tower. There is much use of tufa in the quoins and some very clear herringbone masonry on the south side. The church was restored in 1859 by Sir George Gilbert Scott which has given the building a distinctive 'cleaned out' feeling inside. The north nave window has fragments of fourteenth-century glass, including two very stilted angels swinging censers. The nave has a good selection of hanging wall monuments and a very elegant benefactions board. An unusual sight is the lead plaque on the nave wall that was removed from the tower roof in 1859. It has a picture of a ship of Nelson's time scratched on it - a very crude representation at that - and is probably not by a seaman returned home as local legend asserts. The good east window of 1910 is by C.E. Kempe and Co. Ltd.