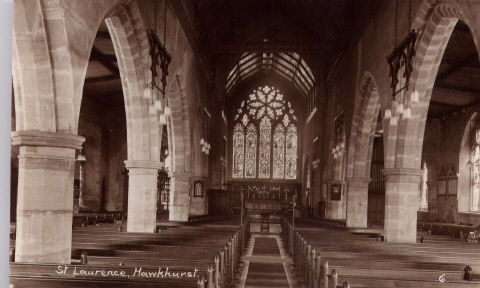 An impressive church set at `The Moor` to the south of its village. Approached from the north the façade is dominated by the two-storey porch, the parvise staircase of which is seen inside. The large nave, with four bay arcades to north and south, is very light due to the fact that most of the old glass was lost in the war. This does not, however, mean that there is no glass - in fact there is a veritable tableau of styles and subjects. Most impressive are those to early saints along the north wall, and one in the chapel depicting King Edward III who introduced the woollen industry to this part of Kent thus ensuring its later wealth. There is a fine 1957 Royal Arms of Queen Elizabeth II. Dominating the west end of the church is a huge Font Cover designed by Stephen Dykes Bower in 1960, whilst the font itself has some fine carving including a Green Man. High in the west wall is a hagioscope which allowed the Sanctus bell to be rung during medieval Mass. By the chancel arch is a modern sculpture of Our Lady and Child by Mary Cox. This is a memorial to Sir John Herschel the well-known astronomer (1792-1871). Lady Herschel is buried in the churchyard.