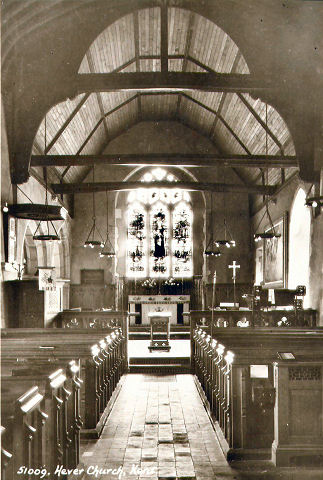 Near the grounds of Hever Castle, medieval home of the Bullen family. Sandstone construction with a nice west tower and spire. There is a prominent chimney to the north chapel, although this is not the usual Victorian addition, but a Tudor feature, whose little fireplace may be seen inside! The church contains much of interest including a nineteenth-century painting of Christ before Caiphas by Reuben Sayers and another from the school of Tintoretto. The stained glass is all nineteenth and twentieth century and includes a wonderfully evocative east window (1898) by Burlisson and Grylls with quite the most theatrical sheep! The south chancel window of St Peter is by Hardman and dated 1877. In the north chapel is a fine tomb chest which displays the memorial brass of Sir Thomas Bullen (d. 1538), father of Queen Anne Boleyn. Just around the corner is a typical, though rather insubstantial, seventeenth-century pulpit with sounding board.