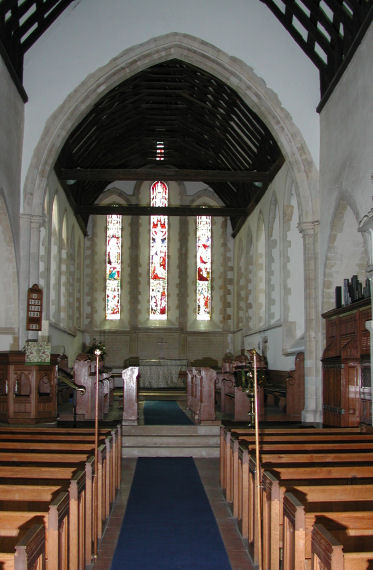 The church is entered from the south and is much longer than first impressions indicate. The nave is very dark, for it has no clerestory and is only lit by the outer aisle windows. The chancel, which is long and out of alignment, is most impressive, being built at a much higher level than the nave. There are two transepts, the one on the south partly blocked by the organ which has lovely barley-twist carving. Behind it is an unexpected chapel, possibly built as a chantry by Thomas de Baa who died in 1339. His tomb occupies the south wall and is a good example of its type. What makes this church even more interesting is that there is a 'twin' monument in the north transept to William Heghtesbury who died in 1372 - although this is in a better state of repair.