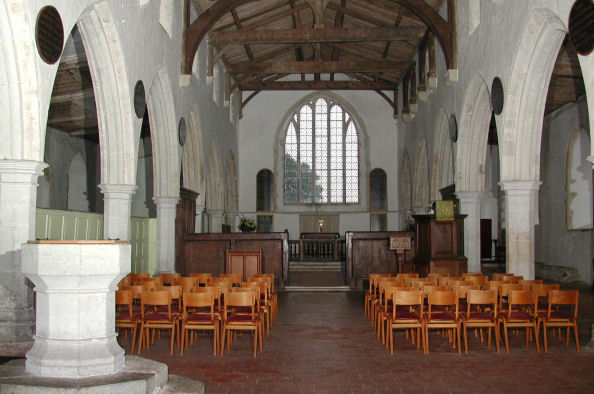 A large church with little in the way of individual interest, but nevertheless with a great atmosphere. It consists of a fourteenth-century aisled nave with eastern chapels and a substantial west tower. Excellent rustic woodwork includes queenpost roofs, medieval parclose screens to the chapels and chancel stalls in collegiate style. The Creed and Commandments hang to either side of the crude east window. The east window of the north aisle is altogether finer, but has been infilled leaving the outline of the tracery visible. Over the south door is a good Royal Arms of George III in a deeply patterned frame. The north aisle is empty, and displays its uneven, unrestored, floor of tile and brick. At the west end of the church is a tremendously powerful tower screen (inscribed 1686 I.G.R.B.C.W) with eight little classical arches either side of a central door, and the church contains a 'Hudd' to protect the minister from the weather whilst conducting funerals.