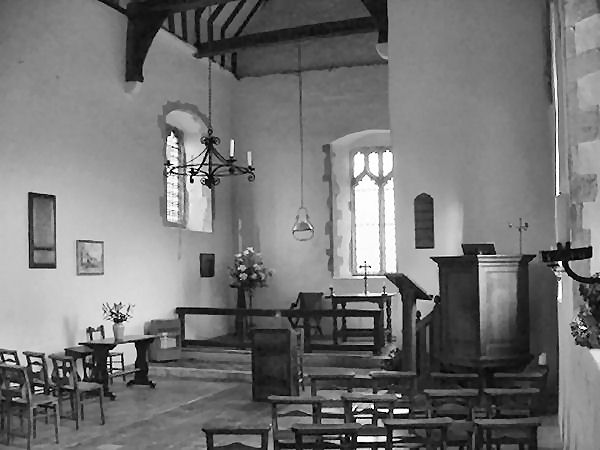 In a very exposed position overlooking Romney Marsh. The church originally consisted of an aisled nave, chancel with chapels and west tower. In the fourteenth century the building was damaged by a French raiding party and in 1559 struck by lightning. As a result the ruins were patched up to provide a smaller church more suited to the requirements of this small farming community. The bulk of the church was demolished, leaving the former south aisle and chapel to serve as the new church. This means that the north wall is virtually unrelieved by windows or monuments. On the south wall the original large windows were reduced in size by infilling the outer lights, leaving some excellent 'ghost' tracery visible. The font is a plain oval bowl and would not look out of place as a garden birdbath. Nearby is an oak-panelled screen which bears the date 1717. On the jambs of the main door are some excellent examples of medieval travellers' graffiti.