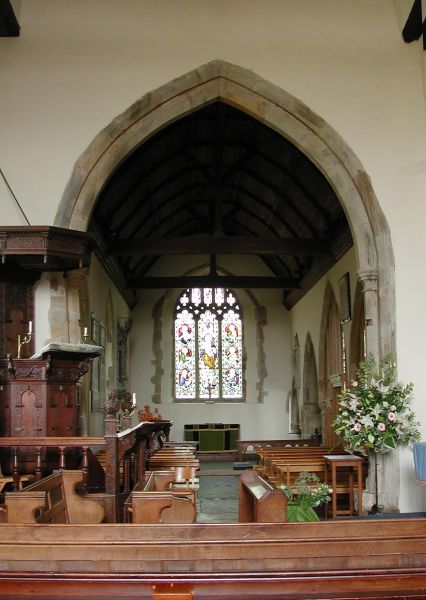 A pretty church with views into Sussex. Nave and chancel with a south chapel, south aisle and west tower which is aligned with the aisle - which means that there is no west door. The chancel and chapel were rebuilt in 1870 by Ewan Christian, but he kept the fourteenth-century sedilia which stand between the two. They form a stone bench with two quatrefoil openings cut through the backrests, giving a view into the chapel. To the east there is a tall lancet opening for a piscina with a rectangular aumbry above. The floor has been raised 3ft 6in and the whole church interior reordered. The fine reredos in the south chapel is by Tinworth (1870), while the seventeenth-century pulpit carries the initials of the then rector, Robert Steede. A good Royal Arms of Queen Anne and crownpost roof complete the old furnishings which were further enhanced in 1984 when a window of the Annunciation was installed to the design of John Piper.