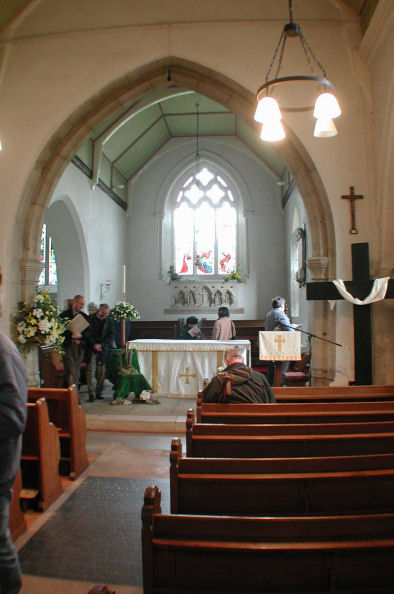 Too generously restored in the nineteenth century to have the feeling of great age; yet Leybourne church has some remarkable objects of interest. The west tower, of a completely different texture to the main building, was constructed by Blomfield in 1874. The base of the medieval tower survives within. The nave is Norman in date and has two good windows of this date in the south wall. The westernmost has some fine vineleaf paintings on its deep inner splays. The star attraction of the church is the heart shrine of Sir Roger de Leybourne (d. 1271). This is a small traceried recess of two lights in the base of which stand two caskets, one of which contains Sir Roger's heart. He died on the final crusade to the Holy Land when it was the practice to send just the heart home for burial. The only other heart shrine in Kent is at Brabourne. Fifteen years after de Leybourne's death King Edward I and Queen Eleanor visited his tomb, and they may have given the two iron crowns that hang on the wall nearby. They were discovered bricked up in the wall by the Victorian restorers.