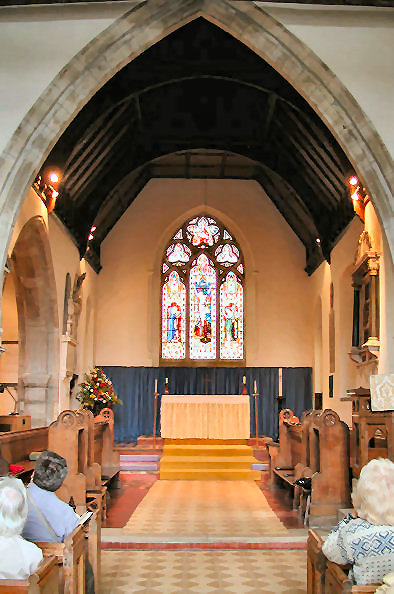 The tower of Otham church is in an unusual position - in the south-east corner of the nave. In fact the church is altogether an unusual shape with a nave and chancel of equal length, both cells having a north chapel. The nave is Norman in date, as evidenced by the herringbone stonework between the porch and tower. There is a good holy water stoup near the south door while a piscina in the nave indicates the position of a medieval altar. The nave boasts an excellent crownpost roof, but that in the chancel was replaced in the nineteenth century. The strange font is fourteenth century and has four amusing carvings of two calves' heads, a face and a leaf. There are also several good monuments including one by Maximillian Colt which commemorates Levyn Buffkyn (d. 1620). It shows Mr and Mrs Buffkyn in bust form set within an interesting hanging marble surround.