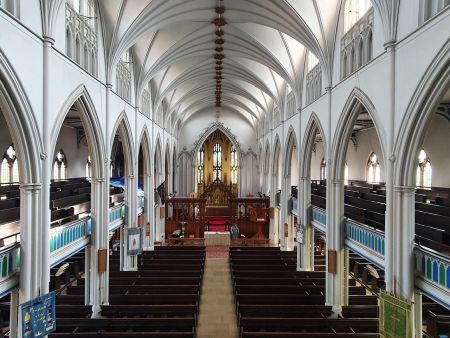 Built in 1824 to the designs of Henry Hemsley, St George's is a 'Commissioners Church', partly financed by Act of Parliament. The enormous west tower, with lantern turret, is by far the most imposing landmark in the town, and has long been used as a navigational aid by shipping. Like most churches of its date there is a 'public hall' feel to the interior, with minimal Gothic detailing and use of cast-iron columns. The altar stands in a small eastern apse with a pretty ceiling whilst the pulpit stands exceptionally high, with a view over the pews which were installed in 1844. In the west gallery is a rather stolid piece of Victorian painting - From Darkness to Light - showing three angels carrying a saint to heaven. It was painted in 1885 by Henry Weigall. In the Lady Chapel is the Dunkirk window, designed by A.E. Buss in 1961. It is of two lights and shows the Dunkirk beaches, Ramsgate harbour and other local scenes, together with the emblems of all the organisations that played a part in the evacuation. It must be said that it is of greater historical interest than artistic merit!