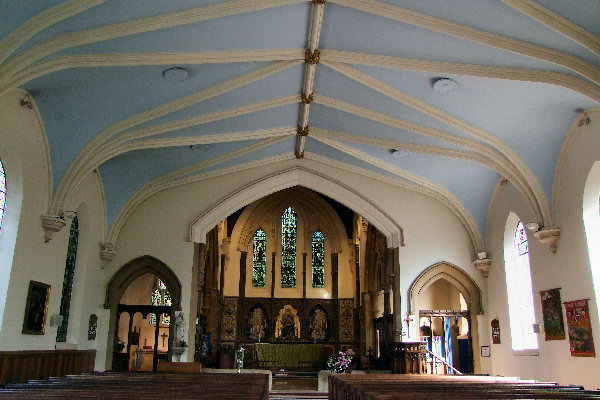 Dominating the roundabout in the village centre, this church was designed by Decimus Burton – but has been much altered. The nave is as simple as can be – a gothick rectangle with tall single lancet windows. The ceiling is prettily painted with its ribs picked out against a blue ground. The surprise, of course, is a muscular nineteenth century chancel stuck on to make the building more ecclesiologically correct. It is a tour de force, especially with its reredos by Salviati and opus sectile by Powell’s. The east window is by Kempe, of 1904 and looks rather tired against the exuberance below. As if to tempt the visitor into making a wrong judgement, the north nave window of St George, to the uninitiated in exactly the same style, is not in fact by Kempe but by his pupil H W Bryans. Why he didn’t sign it is a mystery. What a lovely, light, welcoming church this is, and so unexpected behind its simple west front.