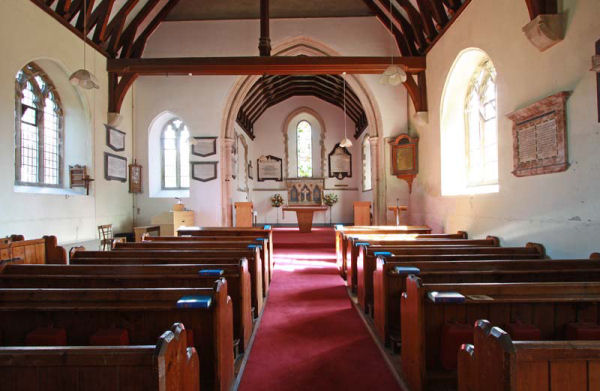 Standing back at a queer angle from the main road, this church has been unlucky over the years. Of thirteenth century origins it had a north aisle which at some stage was demolished in favour of the single roof structure to be found today. This creates an unusually wide interior – not quite as extreme at St Mary at nearby Sandwich, but along the same lines. The chancel has recently (2009) been reordered and simplified with a free standing altar and rose pink carpet – quite a fetching scene – and luckily the nineteenth century reredos has been kept. The War Memorial on the SE corner of the nave is quite a fine construction of rubbed brickwork – almost Lutyensesque in its form. The church was damaged in the War but the stained glass windows in the chancel recording the event (by a Sussex firm) must surely over emphasise the damage as the roof is completely Victorian. All in all this is a delightful little church and one only wishes it was more accessible.