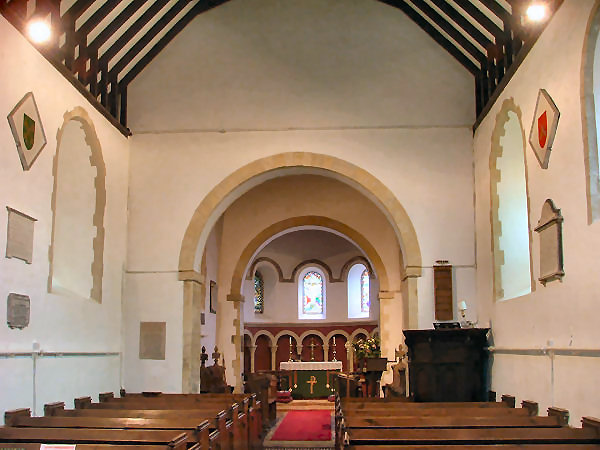 As you approach from the south this church hits you like a cliff face - even more so as its east end, next to the road, is apsidal and something quite out of the ordinary. Norman in origin it was reassembled by Ashpitel (see also Ripple) in the mid nineteenth century, but he kept to the original form of the building as can be seen in old pictures of the church before he got his hands on it. It is a pity that one cannot appreciate the structure from any distance as it is an endearing and loveable thing. Inside the height of the walls wants to make you shout `Saxon` but regrettably their thickness suggests more of a twelfth century date. There is much Norman decoration on the dressed stonework and little heads abound (inside and out) if you open your eyes. Some even have inset eyeballs. The shiny pulpit is Jacobean and a very good example of its time. How it escaped the nineteenth century when everything else in the church was replaced, we can only guess. On the floor is a very early bell - possibly dating from the 13th century (see also Coldred). The stained glass is a motley assortment - some very good indeed, especially the three apse windows. The Ascension in the north wall, by Jones and Willis - and their south nave window of similar vintage - are less attractive but nonetheless part of the rich heritage of this village church.