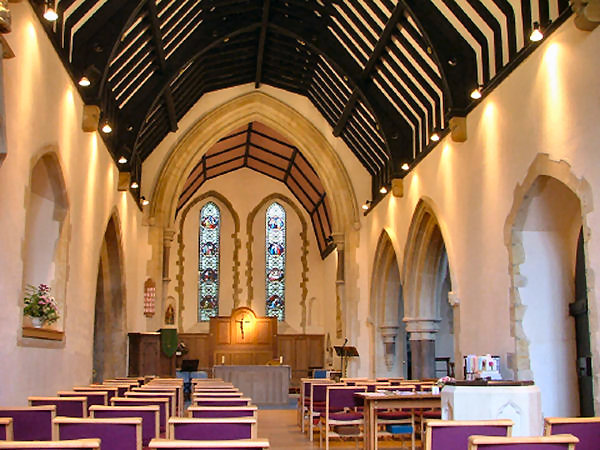 Low beside the road to Canterbury and outside (without) its walls, St Nicholas is a church that has seen many changes. An odd plan of nave with north tower, chancel and south nave chapel, it is built of local flints. Yew trees, the largest of which has an enormous round seat encompassing it, dominate the exterior. Inside the church has been recently re-ordered and the stone floor replaced by one of solid wood - a vast improvement. The pulpit and most of the nineteenth century stonework is by William Butterfield. In the nave are two gothic tablets to the Cooper family but apart from that there are few memorials to be seen. The east window of the south chapel has a fine piece of 20th century glass of The Good Shepherd contrasting with the earlier Mary and Elizabeth in its south windows. The plain arch into the tower shows the difference between medieval and later stonework and now leads to the church room added further down the slope and completely invisible from the south side of the church. The piscina is a wonderful piece of Victorian inventiveness with scrolly end stops and lobed inner arch whilst set into a recess in the east wall is a fascinating statue of St Nicholas the patron saint, with two children at his feet looking just as if they had stepped out of an Enid Blyton book! Delightful if somewhat bizarre.