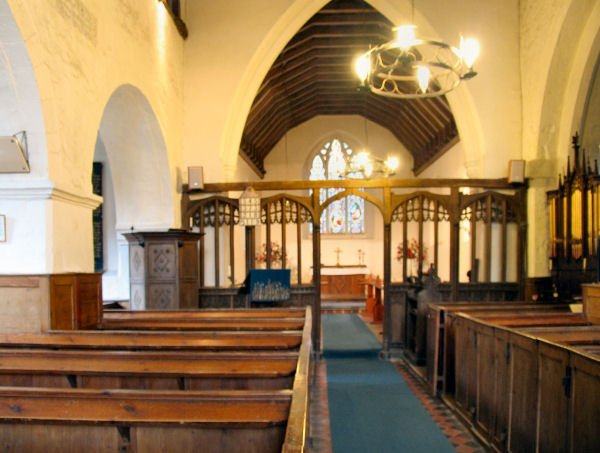 An enigmatic church that presents far more questions than answers. The west wall includes bands of Caen stone that obviously once formed part of a major Norman doorway. Inside, the box pews act as a dark base for the lovely Norman arcades of plain and carved arches. The church is separated by a fine late Rood Screen which ahs lost its loft but which otherwise is well preserved. Its southern end has a different patterning on the base, possibly as the back to a former altar. The east window is possibly by Warrington, whilst the south chancel window is an early work of Kempe. Outside there are blocked arches everywhere and a very tall scar of a former roofline against the east wall of the tower. Whatever was there was a noble structure indeed, possibly a private chapel associated with the nearby castle, which may account for its early demolition. The cat slide roofs of the church and the tall thirteenth century tower are the two memorable features of the exterior.