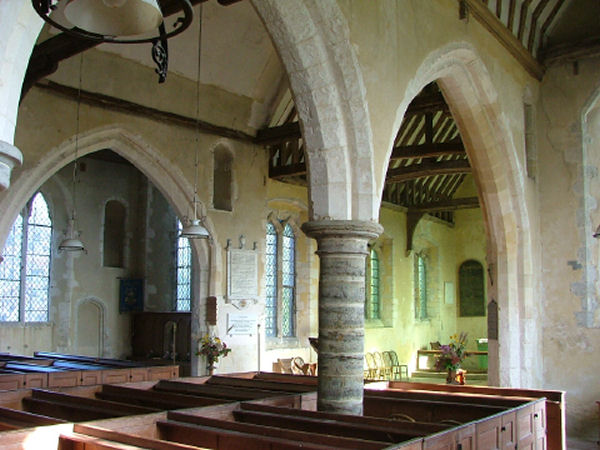 Almost a 'Marsh' church in feel, although it stands on high ground with distant views of the levels below. The church is entered through a nice eighteenth-century brick porch with a Dutch gable. The font is seventeenth century and carved from local stone, but it stands on a quite inappropriate Victorian base. Nearby, on a pedimented screen at the base of the tower, is a good Royal Arms of Queen Anne. The church is light and airy and the 'empty' chancel greatly enhances our appreciation of the interior. The plain box pews are of early nineteenth-century date and there are text and commandment boards throughout. The sedilia were formed by dropping the window-sill and slotting a tiny piscina into the easternmost jamb. The arcades are formed of circular pillars of Bethersden marble that are curiously stratified, whilst the upper doorway for the rood loft is plainly seen at the north-east corner of the nave. Its walkway must have inconveniently crossed the east window of the north aisle as its staircase is in the north aisle wall.