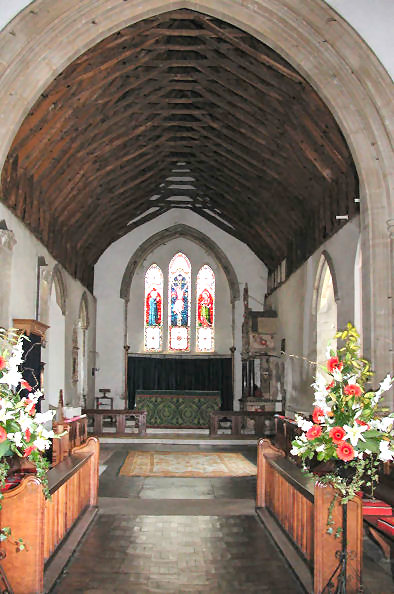 A story of all's well that ends well. A Norman tower and thirteenth-century chancel are linked by a twentieth-century nave that had in its turn replaced one erected to replace its medieval predecessor in the eighteenth century! The west window and those in the south aisle are by C.E. Kempe and Co. Ltd, and of special note is the one depicting the Three Kings. On the south side of the chancel, backing on to a medieval lean-to vestry, is the splendid tomb of Sir Robert Brett (d. 1620), which has recently been restored. The colours are superb and show how churches must have looked when these monuments were new. In the north aisle is a large painting of the Last Supper by Francis Slater, the eighteenth-century artist who painted the ceilings of nearby Mereworth Castle. Hanging on the front of the west gallery are the outstanding Royal Arms of James II, of carved and painted wood. The twentieth-century rebuilding of the church was financed by the sale of an Elizabethan stoneware jug (now in the British Museum), the transaction being recorded on an inscribed stone in the north porch.