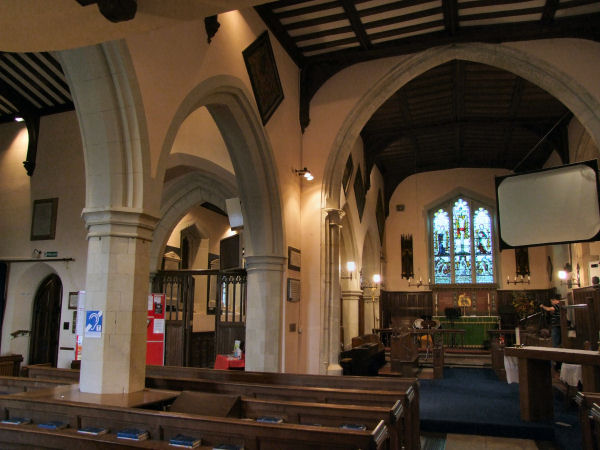 A fine location, next to the medieval Wickham Court, and containing some exceptional things, this church is rather difficult of access. Dating from the 13th and 14th centuries, St Johns has had a chequered history but today is best remembered for its stained glass. Three north chapel windows are late medieval and show, amongst others, a fine St Christopher. The figures are quite large. Other windows are by Charles Kempe and his pupil Herbert Bryans, whilst a west window is by Powell’s. In addition there is a gallery, hatchments and benefaction boards. Memorials abound, and especially touching is that to Margaret Hobbes (d. 1608) in the north chapel. The church was restored by John Dando Sedding (he added the fancy south organ chamber) and he is buried in the churchyard to the north of the church. The lychgate is medieval but only seems to have one piece of genuine woodwork left. The brick vaults in the churchyard are built into the steep hillside – and many of them are totally now above ground.