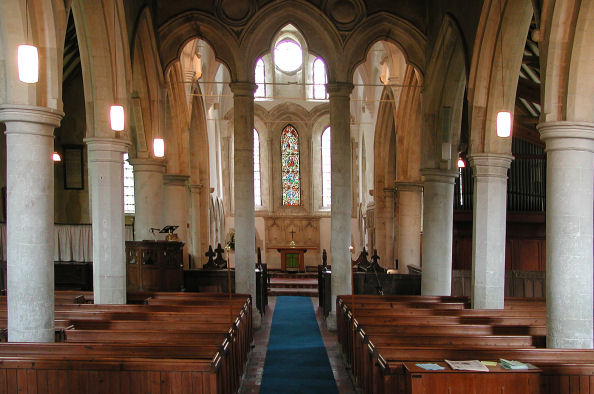 A particularly rewarding church which throughout the Middle Ages belonged to Christ Church, Canterbury, which spent large sums of money on it. The chancel, by far the most elaborate part of the building, is separated from the nave by a screen of three trefoil headed arches supported on very tall cylindrical pillars. That this was not the rood screen may be seen by the notches cut into it that originally carried the wooden screen set at a lower level in between. The chancel is vaulted in stone, held together today by essential iron tie-bars. The sedilia, of three seats, set under battlements, are unusual in having the two easternmost seats on the same level, with just the third a few inches lower. The east window contains some medieval glass depicting the Tree of Jesse, while in the north chapel is some heraldic glass of Richard II's reign. There are some plain poppy-head stalls in the arcaded panels. In 1967 two flagons were sold to the Goldsmiths' Company to raise money for essential repairs to save this church from total collapse.