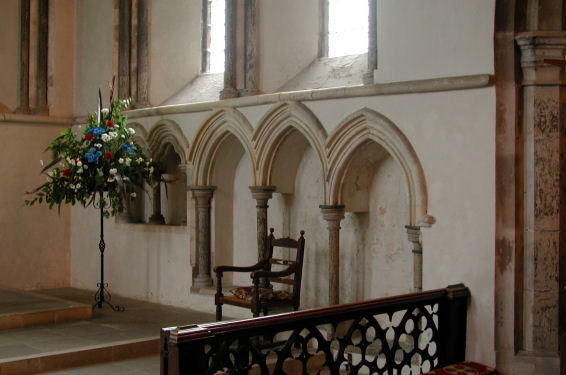 An enormous church with much of interest. The fabric dates from the thirteenth century, and the nave arcades of alternate round and octagonal piers are made of ragstone, which was polished in the nineteenth century to resemble Bethersden marble. In fact there are some genuine pieces of Bethersden marble in the church, particularly important visually being the shafts between the east window lancets. On the south-east buttress of the chancel is a mass dial, and on the main south wall is an excellent large sundial. The rood loft stairway survives in the north chapel where there is a good and rare double hagioscope. The sedilia are made up of three graduated thirteenth-century seats with a double piscina incorporated as part of the same scheme. In the south aisle is a medallion of the Blessed Virgin Mary, while the nearby east window depicting the Crucifixion is by Kempe. In front of the pulpit is the brass to a priest, Nicholas Gore (d. 1333), a quatrefoil with a circular inscription, into which is set the figure of Gore in his vestments. The Royal Arms are those of George III and were painted by a local artist, Joseph Gibson, in 1773.