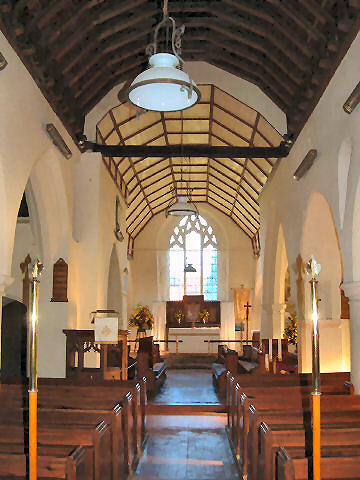 Famous for the grave of Walter Burke, in whose arms Nelson died. The church stands low in its valley and is visually undistinguished, but external appearances are misleading as it contains a great deal of interest. Part of the arcade between south aisle and nave is formed of Saxon walling, with a double splayed window visible over the central arch. The wall was cut through by the present arcade in the thirteenth century. There is a standard twelfth-century font of five columns supporting a square bowl. The tower stands in an unusual position to the north-west of the nave, and the doorway between tower and north aisle shows deep notches cut by the bell ropes when the Sanctus bell was rung. By standing outside the door the ringer could see the high altar and the altar of St Blaise in the south chapel. A lancet in the chancel forms a low side window, while a more conventional, although much smaller, low side window exists in the south-east corner of the south aisle. There is also a fine fourteenth-century piscina.